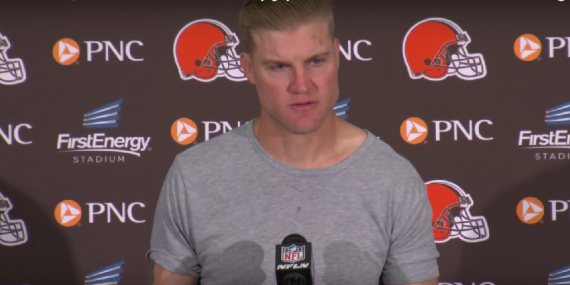 Josh McCown Could Be Spotted In Dallas Cowboys Side This Time; Tony Romo To Leave The Team?

Josh McCown was waiting for long time to play as part of his favorite team.

2017 NFL Draft: Draft Order Is Ready; Important Facts To Consider In The Picks

Since the 2017 NFL Draft order is ready, more announcements by teams may come in the coming days.

DeMarcus Cousins Transfer Doesn't Add To The Winning Factor Of The Pelicans? Initial Matches Seems So

DeMarcus Cousins might be looking for some time to get settled with the team as this is his first transfer in the career.

Cavaliers set to beef up their lineup by getting Kyle Korver as J.R. Smith recuperates from his thumb injury. "A lot of relationships I care a lot about here and I'm going to miss," says Korver in an interview.

The "WWE Royal Rumble 2017" is expected to see some fierce fight between the superstars.

‘Alabama Football’: Team Gets Ready To Win The Title; Know Their Preparations For The Peach Bowl

The defense of the Alabama should show their consistency in the Peach Bowl, otherwise, the story will be different.

‘NFL Draft 2017’: Mitch Trubisky of North Carolina And Tim Williams of Alabama Are Lining Up For The Draft

The players like Mitch Trubisky are sure bet for NFL Draft 2017, but it may also see some surprise faces.

‘Ezekiel Elliott’ And His Sunday Touchdown Brings Fortunes For The 'Salvation Army'; Group Gets Donation Boost From Fans

Ezekiel Elliott could give a clear message to the audience with his act while making his contribution.

Blake Griffin has been riddled with injuries as of late, while Nerlens Noel's career Is currently In limbo.

NBA Trade Rumors: Carmelo Anthony Moving To Other Team Due To Feud With Phil Jackson?

There are rumors that New York Knicks might trade Carmelo Anthony due to his alleged feud with Knicks president Phil Jackson.

Tim Duncan Bids Goodbye On His Jersey Retirement Ceremony: What Comes After The Retirement?

Tim Duncan retired after 19 years playing for San Antonio Spurs. he will remain our All-star player in the NBA League even in his retirement.

The New England Patriots make short work of their intra-conference rival Denver Broncos for a 16-3 win while the Oakland Raiders carved out a way to a dramatic finish and a 19-16 victory over the San Diego Chargers Sunday in Week 15 action.

Carmelo Anthony Of New York Knicks Allegedly to be Traded

The New York Knicks are rumored to be considering a trade with the Boston Celtics their nine-time NBA All-Star small forward, Carmelo Anthony.

The veteran reporter for TBS and TNT (both networks, like CNN, are part of Turner Broadcasting), who had never missed a day of work in his life, was suddenly sidelined.