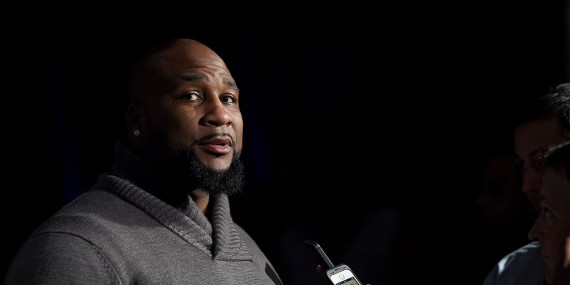 The advice by Marcus Spears is applicable to all the players irrespective of the game type.

Oakland Raiders Plan To Recruit Marshawn Lynch This Season? Will The Seahawks Trade The Beast Mode?

Marshawn Lynch has plenty of time in grounds considering Tom Brady plays an excellent game at 39.

Dontari Poe is expected to greatly fit the Falcon's side along with Grady Jarrett.

The downfall of Lorenzo Romar downfall was unexpected though it was gradual.

2017 NFL News And Updates: Do These Surprising Moves Decide The Season?

Players like Brandin Cooks can contribute to the success of the team in 2017 NFL.

DeMarcus Ware's announcement was sudden considering his age and performance in the recent years except 2016.

Brock Osweiler Traded To Browns From Texans As The Second Pick

Brock Osweiler was a surprise trade of the season, but more trades can be seen in the coming days.

The long-time offensive rookie of the team will be missing the Cowboys side this year.

Kawhi Leonard Reinvents Himself After Every Game; Here's Some Interesting Facts About Him

Per DeMarcus Cousins, Kawhi Leonard shows the "flashes of Kobe."

If the reports are believed, there are more changes in the team expected in the coming days.

Draymond Green Is Unhappy As Knicks Didn’t Play The Music In First Half; Finds It "Completely Disrespectful"

The no-music strategy by Knicks is not good as both players and viewers don't like the vibe.

Brandon Marshall would be looking for another great season this year with a new team.

2017 NFL: Watch These College Football Stars For A Spectacular Display

NFL Free Agency News And Updates: Alshon Jeffery To 49ers? Murray To Eagles? Who Else Is Moving?