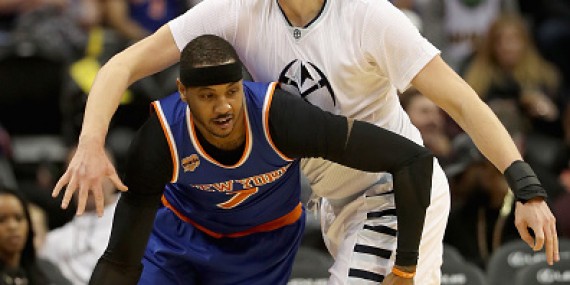 A Carmelo Anthony return in New York Knicks was not enough to manage to win the "must-win" game against Denver Nuggets with 127-114. Anthony returned after missing last Thursday's game due to soreness of his shoulder.

Hot-shooting freshman point guard Patrick Good will be given the final slot of the Appalachian State Mountaineers, hoping they would be saved, Coach Jim Fox has confirmed. Last Saturday, the team was trailing by three points in the game with seven seconds left at Holmes Center.

No one really expected Matt Moore and Cameron Wake to bring the Miami Dolphins to the victory against the New York Jets but they did and it surprised everyone.

The Air Jordan XVI OG ‘Midnight Navy’, Air Jordan 11 GS Heiress, and Air Jordan 3 ‘Wool’ sneakers will be available starting today and this coming week. Where to buy these shoes?

Week 15 Of Fantasy Football: Daily Advice; Who Will Sit And Who Will Start

It was a good news for fantasy owners as Vikings running back Adrian Peterson revealed that he will play against the Colts in week 15. This week he can be considered as a sleeper.

BAMTech Plans to Launch A League of Legends Streaming Agreement

BAMTech Plans to Launch A 'League of Legends' Streaming Agreement

Though he failed in UFC dope test, Brock Lesnar has a huge fan following in WWE.

It seems like Floyd Mayweather Jr. was having a good time with his social media followers last Wednesday evening after he posted a video of one of Conor McGregor's UFC fight on his Instagram, where the latter can be seen tapping out in submission.

While the New York Giants are making a strong case for themselves lately, it remains to be seen if they can make it all the way to the Super Bowl in 2017. New York Giants is currently at the fifth spot of the NFC standings.

Will The Sliding Lakers Agree To Trade Russell & Ingram For Paul George Now?

The Los Angeles Lakers had been reportedly seeking Indiana Pacers' George for some time now as a probable replacement for the retired Kobe Bryant but now after 8 consecutive defeats, will Luke Walton's man still think the same?

Cristiano Ronaldo Scores 500th Club Goal But Not Without Controversy

Real Madrid star Cristiano Ronaldo scored his 500th club goal in Club World Cup but his score in the dying moments of the match also created a controversy.

Craig Sager, an NBS sideline reporter, famous for his colorful suits dies at 6 due to cancer.

And, if Michael Floyd manage to land on a playoff bound team and somehow get his act together, then it could, actually, turn out to be a blessing in disguise for the former Arizona Cardinals wide out.