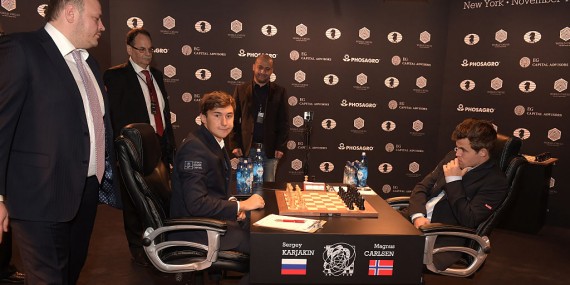 ‘Magnus Carlsen’ vs. ‘Sergey Karjakin’ ‘Tiebreaker’: The ‘World Chess Championship 2016’ Climax Is On Nov. 30, What Is It All About?

The Denver Broncos recently lost to the Kansas Chiefs in te recent NFL games, at the score 30-27.

The Oakland Raiders Won Over The Carolina Panthers, But Derek Carr Got Injured

On the high spirit game of The Black and the Silver, the Raiders won the game. But one of its quarterbacks got hurt.

On Thanksgiving, as the former NBA star was celebrating, his nephew went missing and found lifeless in an L-shaped lake in the nearby residence.

J.R. Smith Was Upset As The Cavalier Won Over The Sixers

J.R. Smith of the Cleveland Cavaliers is still the best defender. However, he was distressed over his performance that the Ohio State-Michigan game.

The NFL quarterback Kaepernick was booed when he came out of the field during last Sunday's Game against the Dolphins.

The last week matches give a better "Bowl Projections 2016-17" and "Ohio State" is expected in contesting Fiesta Bowl.

Los Angeles Lakers might or might not be slowing down, would losing their startes would be a factor? Read more here!

NBA Updates: Oklahoma City Thunder’s Russell Westbrook; The Triple Double Machine, Where Should He Be?

Fans did not hear so much updates from Michael Schumacher following a serious injury he acquired due to skiing.

Adidas takes a step towards a more sustainable future. The company has presented a biodegradable prototype for a show which could take the industry in a completely different direction.

Memphis Grizzlies' Zach Randolph, out with indefinite absence due to emotional and personal issues. Find out here why.

The key players sold out and inconsistency may spoil the dream "Super Bowl 2016" of "New England Patriots".

Milwaukee Bucks' Matthew Dellavedova coming from Nada to Prada for him, being the inspiration of a basketball movie. Find out more in here!