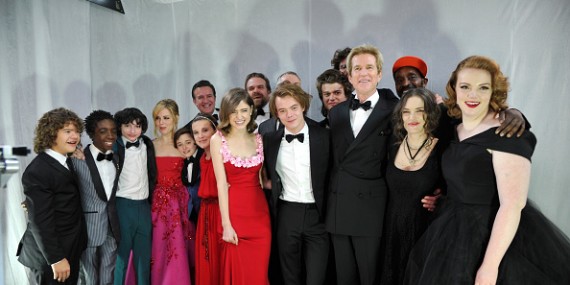 'Stranger Things' Season 2 Spoilers, News & Update: New Characters To Appear In The Series, What We Know So Far!

"Stranger Things" Season 2 is currently in production and there are already hints of scenes from the show. The new characters are also to be introduced in the premiere of the upcoming season.

'Waitress' News & Update: Sara Bareilles Stars In The Broadway Musical; Musical Expected To Be A Hit

Sara Bareilles is to star in a Broadway musical titled "Waitress." She also is the one who has written the score for the stage play.

"American Horror Story" Season 7 is hinted to be about the US Presidential Elections. The show's creator and producer, Ryan Murphy hints of what is in store for fans in the upcoming season of the series.

"Outlander" Season 3 finally has released a schedule for airing. The series is expected to return on Starz in September this year.

"Sons of Anarchy" spin-off is in development and is set to star Edward James Olmos. Olmos is to be in the show as a series regular.

Amazon has picked up the anthology series "Electric Dreams" by Philip K. Dick. The series is from Sony Pictures Television produced by Bryan Cranston and Ronald D. Moore as showrunner.

The upcoming episode of "The 100" Season 4 is set to introduce a new character. It seems that the people are also to be challenged more as the radiation gets closer to where they are.

'Supernatural' Season 12 Episode 12 Spoilers, News & Update: Mary Gets In Trouble, What We Know So Far!

A new promo trailer is out for "Supernatural" Season 12 Episode 12. It seems that Castiel (Misha Collins) may be in danger in order to save Sam (Jared Padalecki) and Dean (Jensen Ackles) Winchester.

The Universal Arc happens in "Dragon Ball Super" Episode 78. The tournament of different universes will be witnessed by many in the upcoming episode.

Keanu Reeves Hints Of The Plot For 'Bill & Ted 3,' The Pair Is Our To Save The World

Keanu Reeves recently hints of a "Bill & Ted 3." It is hinted that the film is to have Bill and Ted in their 50's and still trying to make their own song as was left from the original franchise.

"Jane the Virgin" Season 3 had a sudden twist of the story when Michael (Brett Dier) died. The story moves on three years after his death and Jane (Gina Rodriguez) is hinted to be at a wedding ceremony.

"Outlander" Season 3 is in production and there are recent photo leaks of the series shot in South Africa. The cast and crew have been all over places in order to finish the set for the upcoming season.