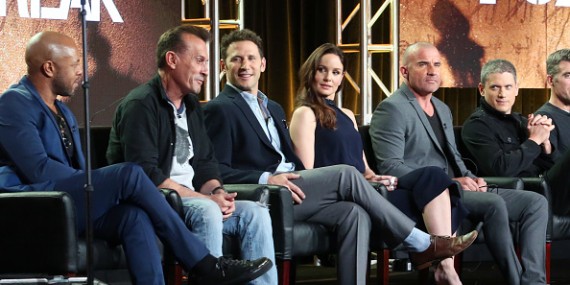 "Prison Break" Season 5 is set to return and the latest trailer has been aired during the halftime of Super Bowl 51. Netflix has a part on why the series is coming back for the fifth season.

The latest trailer for "Pirates of the Caribbean: Dead Men Tell No Tales" is released. The sneak peak of the trailer has been revealed during the halftime of Super Bowl 51.

A new trailer for the fifth and final season of "Samurai Jack" is out. The trailer is set to be fit for adults. The final season of the series is said to be grimmer than the previous ones.

The latest trailer for "Stranger Things" Season 2 aired during the Super Bowl 51 halftime. It teased fans of its air date and a glimpse into the life of the kids from upside down.

'The Handmaid's Tale' Spoilers, News & Update: New Trailer Revealed On Super Bowl; A Woman's Role Is Only To Breed?

"The Handmaid's Tale" which is a Hulu original already revealed its first trailer. A new trailer has been released and it is in time for a Super Bowl commercial.

'Suits' Season 6 Spoilers, News & Update: Harvey Finds A Way To Let Mike Take The Bar; All Is Well In The Specter Household

The latest episode of "Suits" Season 6 shows how Harvey Specter (Gabriel Macht) comes in to terms with his mother. They have been separated for a long time and it seems that Harvey managed to face his past.

"Vikings" Season 4 concluded recently and a surprising death had been delivered. It seems that the sons of Ragnar (Travis Fimmel) are to be divided on the upcoming season of the series.

"Grey's Anatomy" Season 13 may have one character less soon. It is reported that Jerrika Hinton who plays the role of Dr. Stephanie Edwards is to leave the series.