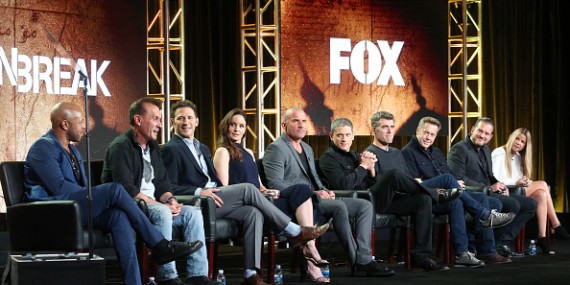 "Prison Break" Season 5 is set to return with Michael Scofield (Wentworth Miller) alive. There are also hints of the title for the upcoming season.

'Once Upon A Time' Season 6 Spoilers, News & Update: Regina Sees Robin In The Same Dimension; Could This Be Real?

"Once Upon a Time" Season 6 midseason finale has sent Emma (Jennifer Morrison) and Regina (Lana Parrilla) in a different realm. The latest episode of the series gets Regina confused over the presence of Robin (Sean Maguire) in the same dimension as her.

'Tron 3' News & Update: Disney Is Set To Star Jared Leto In The Reboot; Third Installment Not A Sequel?

"Game of Thrones" Season 7 is set to return and is currently in production. HBO recently released a new teaser for the series.

'The Big Bang Theory' News & Update: Spin-off Series In The Works; Young Sheldon Has Been Named

U2 Accused Of Plagiarism; Being Sued For 'Achtung Baby's' Song 'The Fly'

U2 is being sued for plagiarism. British musician Paul Rose filed a $5 million suit against U2. Rose accused the band for copying signature elements from his work.

Netflix has just released a trailer for its new film "War Machine." The film is starred by Brad Pitt who portrays the role of Glenn McMahon.

'The Man In The High Castle' Season 3 News & Update: Michael Gaston Becomes Series Regular, What We Know So Far!

"The Man in the High Castle" has been renewed for Season 3 by Amazon. Michael Gaston is already a series regular in the third season.

Mary Winchester (Samantha Smith) will work with the British Men of Letters in "Supernatural" Season 12 Episode 14. The alliance is to fight a Vampire coven in the upcoming episode.

Ryan Murphy hinted that the "American Horror Story" Season 7 storyline will involve the US Presidential Elections. It seems that Donald Trump is not to be portrayed in the upcoming season of the series.

"Dragon Ball Super" Episode 81 will again bring in the Universal Survival Arc. Right after Gohan's battle, Goku will fight with the Universe 9 fighter.

'Suits' Season 6 Spoilers, News & Update: Will Mike Make It To Be A Lawyer? Gibbs Comes After Mike

Mike Ross (Patrick J. Adams) is set to become a lawyer in the latest episode of "Suits" Season 6. It seems that Anita Gibbs (Leslie Hope) will be standing in the way towards Mike's longtime dream.

"Outlander" Season 3 is off to return on television and the stars hint of hotter love scenes from Jaime (Sam Heughan) and Claire (Caitriona Balfe). The upcoming season will be based on Diana Gabaldon's third book The Voyager.

Gwen Stefani Returns As 'The Voice' Season 12 Judge; Will There Be A Power Couple in The Judge's Seat?

Real life couple Gwen Stefani and Blake Shelton compete against each other in the The Voice Season 12.

Emma Watson plays the role of Belle in the remake for "Beauty and the Beast." Watson shares that being involved in the film is romantic and full of emotions.