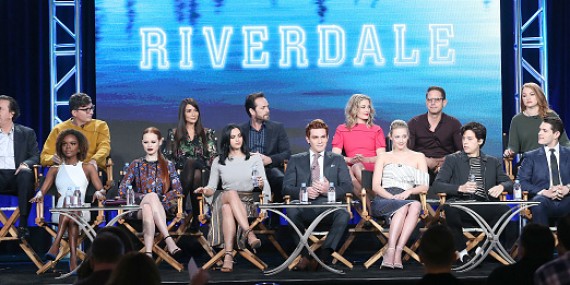 "Riverdale" has premiered and brings in the modern Archie comics characters. The series recently had its first episode and a trailer of the second episode has just been released.

'Supernatural' Season 12 Spoilers, News & Update: Castiel Is Haunted By His Past; Who Is The Sorceress?

"Supernatural" Season 12 returns with Sam (Jared Padalecki) and Dean (Jensen Ackles) in prison. It is hinted that there are more secrets of Castiel (Misha Collins) to be revealed in the upcoming episodes of the series.

"Making a Murderer" Season 2 is reported to be released this year. The team is currently in Wisconsin to film the set for the second season.

"Bates Motel" is down to its fifth and final season. Rihanna is set to be Marion Crane in the upcoming season.

"Game of Thrones" Season 7 has been delayed from its original air date due to the weather conditions. As of this time, the series is in production and as early as now it is hinted that the upcoming season is to give out an epic story.

'Lucifer' Season 2 Latest Spoilers, News & Update: Lucifer Is Gone; He Finds It Difficult To Trust Anyone

"Lucifer" Season 2 winter finale finds Chloe (Lauren German) being poisoned. Lucifer (Tom Ellis) helps her and they find their way to the hospital.

'The Devil Wears Prada' Goes To Broadway; Elton John Works On The Musical

Elton John is currently working on a musical adaptation for "The Devil Wears Prada." The production for the broadway musical is a collaboration with John who will be working on the music and Paul Rudnick on the lyrics and book.

"The Good Place" has been renewed for season 2 by NBC. The comedy series got an early renewal from the network.

The PS4 and PC versions of "Fallout 4' are going to be getting updates for the game. The game is to get the high resolution on the devices.

A new clip for "The 100" Season 4 reveals the end of the people. The characters are to face their enemy in the upcoming season.

"Outlander" Season 3 is already on the production stage and there are already several hints on what the season is bringing in. There are also other characters coming in for the third season and this includes Jaime's (Sam Heughan) confidante.

The title for "Star Wars Episode VIII" has just been revealed. It has been titled just "Stars Wars: The Last Jedi."

'Guardians Of The Galaxy' Vol. 2 Air Date, News & Update: A Groot Spin-off Is Possible; How To Make Baby Groot Cake

"Guardians of the Galaxy" Vol. 2 will air in a few months. There are already hints of a Groot spin-off coming for the film.

"Vikings" Season 4 is close to its conclusion and Ragnar Lothbrok's (Travis Fimmel) sons are off to fight for their father's death. In this season's finale, Jonathan Rhys Meyers is to be introduced as the character Heahmund.

Xbox Updates: Project Scorpio the "Next-Gen" and the Most Powerful Console Ever

Reviews have spilled that Xbox Project Scorpio is the most powerful gaming console by far.